Music Festival through the Vermont Music Educators Association, to be held at BFUHS 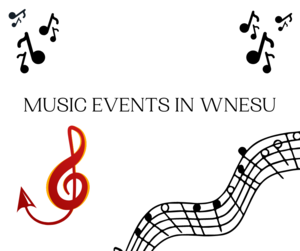 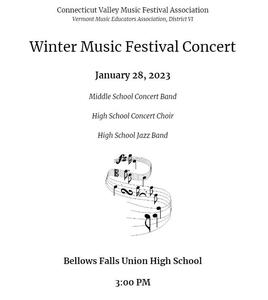 Students and teachers from schools across southeastern Vermont are coming together on Friday and Saturday, January 27th & 28th, 2023 for the Vermont Music Educators Association, District VI Music Festival hosted by Nicholas Pelton and Jennifer Arrow at the Bellows Falls Union High School.

Approximately 150 student musicians were placed in one of the three festival music ensembles directed by distinguished guest clinicians and organized by area music educators, based on the result of auditions and teacher recommendations. The Middle School Concert Band, managed by Leland & Gray’s Rene Bernard will be under the direction of James Pecsok. The High School Concert Choir will be directed by Stefanie Weigand and is managed by Andrea Nardone of Hartford High School. The High School Jazz Band is managed by Steve Cady of Vermont Academy and Keene State College and will be directed by John Mastroianni.

The following Bellows Falls Union High School students are in the District festival this weekend:

Students in each of the music ensembles were provided their respective parts to prepare in advance of the two-day festival; they will work collaboratively to develop their skills and prepare a program of four music selections for the culminating performance.

The concert will take place in the Bellows Falls Union High School auditorium at 3:00 PM on Saturday, January 28, 2023. This concert is open to the public. The cost of admission is $6 for adults/ $4 for K-12 students and senior citizens age 65 and over.